It has long been known that certain solid additives, i.e., a heterogeneous nucleant (HN), can facilitate the deposition of crystals from solutions or melts. Often times, in spite of the fact that the solution to be crystallized is supersaturated with respect to solute, an initial nucleation event does not occur and therefore there is no subsequent crystal growth. An efficacious heterogeneous nucleant can assist, by decreasing the translational motion of species in solution by adsorbing them onto its surface, in overcoming the entropic barrier which allows ordering of the solution species into a 3-D crystal. Examples include the seeding of solutions with the crystals to be formed, chemists scratching glass flasks to induce crystallization, the rapid freezing of supercooled water by the addition of ice and the formation of rock candy on strings dipped into concentrated sugar solutions. More recently, “debris-based nucleants” such as ground glass, seaweed, hair, polymer spheres and other detritus, which could exert unknown deleterious effects on the crystallizing proteins, have been used in attempts to increase crystallization efficacy. Since the structural information obtained by determining the 3-D X-ray crystal structures of crystallized proteins is invaluable in determining protein function, and there is generally a very low chance of obtaining X-ray diffraction quality single crystals in any given crystallization trial, there is an urgent and immediate need for materials to initiate and facilitate the crystallization of proteins. One way to encourage, control, facilitate, accelerate, and provide selectivity in terms of polymorph crystallized, is to use a heterogeneous nucleant.

There is no universally accepted explanation for the mechanism by which a heterogeneous nucleation catalyst performs its function of facilitating protein crystallization. It is clear, since the crystal is comprised of a regular spatial array of molecules or substituents, and these incipient crystal components are well separated in the solution or melt, that the constituents must lose translation degrees of freedom and some amount of entropy in order to form the solid. So in some sense, the heterogeneous nucleation catalysts likely provide a surface onto which the soluble constituents may attach themselves thereby reducing their translation freedom. Once absorbed a certain amount of surface mobility is required of the protein. The heterogeneous nucleant must allow enough surface diffusion of the proteins molecules for them to “anneal” into their preferred orientation in the lattice. If the adsorption is too weak and fleeting to induce order, or so strong that the protein is adsorbed in an irreversible manner in a random orientation, then there is no crystalline nucleus onto which the protein molecules may adsorb to grow the crystal. 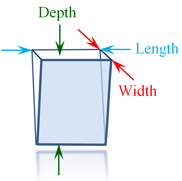 Fig. 1 A crack on a substrate surface begins with a finite width which tapers to zero width as the crack terminates within the substrate.

constituents into a long one dimensional (1-D) string as the first step on the path to a 3-D crystal, a more likely initial structure evolving on the way to a 3-D crystal is a 2-D “raft” of protein molecules on the surface of the heterogeneous nucleant. Once the ordered raft or sheet forms it may act as a template or seed crystal to facilitate further crystal growth. Therefore, it could be expected that a structure that had spatially confined 2-D spaces (e.g., cracks, fissures, crevices, slits, clefts, holes and other forms of damage) might act as particularly effective nucleants and would be expected to have a higher degree of efficiency than a pore in a debris-based nucleant because the pores offer little restraints in the third dimension. Note that, of course, the crack-like features must also have a third dimension, however limited in size the third dimension may be, or it would not be possible for protein molecule to enter the feature. As shown in Fig. 1, the third dimension within the crack (perpendicular
to the plane of the crack; designated as width in Fig. 1) is smaller than the corresponding distance within a pore. For example, a thin crack would provide more constraint and diffusional hindrance (i.e., it would be easier for the soluble species to lose their motion and come together to form the crystal) to the nucleating 2-D raft as compared to a 3-D pore. Also, since the largest dimension of the crack is directly exposed to the nutrient crystal growth solution, when a nucleant forms in a crack the incipient crystal has good diffusional access to the nutrient solution.

A heterogeneous nucleant (HN) can influence crystal growth in many ways but the fundamental effect must be to form a single type of nucleus at the earliest stages of nucleation and crystal growth. It seems clear that once a given type of nucleus forms, other crystalline polymorphs or nuclei of differing habit cannot form and are all other nuclei polymorphs but one are completely suppressed. There are many examples in the Image Gallery showing the strong influence of the Photon Hammer nucleants on crystal growth in the ways enumerated below. In all of the examples shown, which provides a summary of hundreds of heterogeneous nucleation experiments, there was never an example of two different crystal habits, types or polymorphs observed within the same crystallization solution. This is consistent with only one polymorph existing in the solution in the presence of the heterogeneous nucleant.

A heterogeneous nucleant is generally a solid state material which, when in contact with a solution containing the soluble species to be crystallized, alters the course of crystallization as compared to the course in the absence of the HN in ways such as: 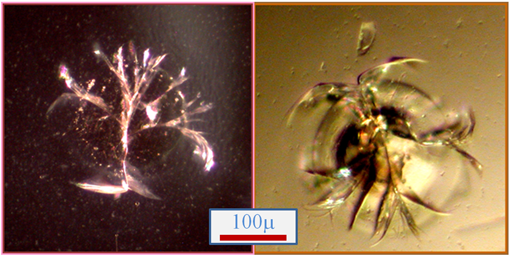 Fig. 2 Myriad plumate microcracks are created using Parallel’s unique Photon Hammer heterogeneous nucleation technology. Note that each crack has a finite width as it emanates from the laser damage zone but tapers to zero width, in directions both parallel an perpendicular to the substrate surface, as it terminates a short distance away. Presumably, at some point along the crack, there exists a space of the correct size that is capable of adsorbing protein molecules and reducing their translational motion. The reduced translation motion could assist in forming the nascent nuclei required for further crystal growth.

We hypothesize that the cracks resulting from the Photon Hammer fabrication process (Fig. 2) provide a geometrical environment suitable for ordering the soluble protein molecules into incipient nanoscopic nuclei.

Cracks with a tapering morphology, where the cracks taper from a finite width at the site of crack initiation to zero width at the termini of each crack, could provide a geometry favorable for the ordering of the protein molecules into a 2-D raft-like structure capable of nucleating further crystal growth.

Examples of most of the above-described heterogeneous nucleation phenomena may be found within the Image Gallery section of this website.